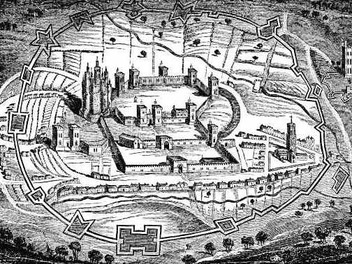 Following his arrest, Thomas Vaughan was escorted under guard, the one hundred and eleven miles to the castle town of Pontefract. The route taken is not known, however, one way would to be Watling Street, along the Fosse Way and Ermine Street and then the final part of the journey along what is known as Roman Ridge on which Pontefract is situated. A small mounted company such as Vaughan's guard, could expect to cover about thirty miles a day, so it can be estimated that they would arrive in Pontefract on or about the 4th of May.

​Pontefract Castle was deemed one of the most impregnable castles in the country, in Shakespeare Richard III, Anthony, Earl Rivers states

This was no exaggeration, the castle's dungeons were notorious, cold, wet and dark the whole dungeon area extended across many different rooms, all about thirty five feet below the castle's Round Tower.

Restrained, exhausted and afraid, Vaughan and his guards may have approached the castle via its Eastgate, Gloucester’s men identifying themselves as they approached. The castles mighty drawbridge dropped and as the portcullis with its chains and heavy counterweights cranked open, a solid gate made of massive oak timbers opened too and Thomas Vaughan was led inside. With a quick turn of his head, did he look back just as he done only days before as he left Ludlow, capturing in his mind's eye one perfect view that would sustain him through the coming days.

Did anyone within the castle know why this dishevelled and aged man was there? Chances are that those in charge had not been told of Vaughan's offence, his guards ordering that he be taken to the castle's dungeons straight away.
​
It is unlikely that Vaughan was treated with the respect his rank deserved, the twenty four years he faithfully served Edward IV counted for nothing here. Vaughan may have been dragged from his horse, did he resist as he approached the castle's round tower and manhandled down the twenty or so steps that lead from the first landing in the tower down to the dungeon. Did he catch his elbows and head as he was pushed against tunnel walls and shoved bruised and bleeding onto the floor of a cell that measured barely three foot by eight foot, and was only seven feet high.  ​ 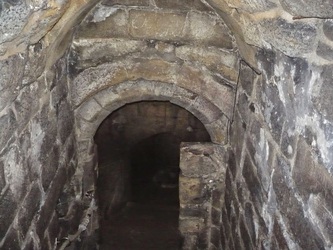 ​Daylight never reached Pontefract’s dungeons. How many days and nights Thomas Vaughan languished in his cell before Anthony Woodville and Richard Grey arrived is not known, when he heard their anguished voices echoing through the maze of tunnels was it then that he realised all was lost? ​ 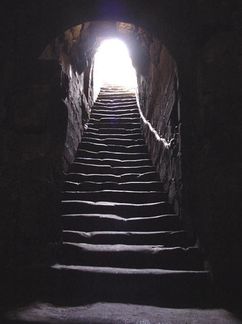 On the 25th June 1483, Sir Thomas Vaughan was dragged up the stone stairway into the light, for a moment he was too weak to stand and lay on the ground protecting his eyes from the sun, in his blurred vision he would have seen the assembled forces of the Earl of Northumberland here to secure the area as much as to witness the event.  With one rough shove from his guard Vaughan fell into line alongside Anthony Rivers and Richard Grey, all three men looked at one another for one moment but nothing was said for they knew that this was the end.

High ranking nobles as Anthony Woodville, Richard Grey and Thomas Vaughan would have been beheaded with an axe, this was considered to be an honourable and merciful death. In what order each man died is not recorded, Rivers, it has been said, met an ‘exemplary’ death, but what of Grey and Vaughan?

When his turn came Vaughan rested his head on the wooden block, as the executioner raised the axe high did Thomas Vaughan recall the scene his eyes captured the day he arrived or did he get one last glimpse of the green fields through a gap in the battlements or was it just the grubby, hay strewn castle floor, we don’t know. Within minutes, Vaughan's blood and that of his associates seeped through the stone work, and flowed into the streams to join with blood of the men who lost their lives in the three Yorkshire battles fought in the name of what we now call  the Wars of the Roses. Records of 1483 show that Richard III’s receiver allowed the sum of 46s. 4d for the expense of burying Richard Grey. 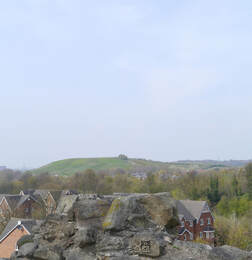 Was this Thomas Vaughan's last view of the world? Two Hoots Photography 2019
Anthony Woodville, on the 23rd June, two days before his execution, added the following to his will.

“My will is now to be buried before an Image of our blissid Lady Mary, with my lord Richard, in Pomfrete.”

Their decapitated heads and their bodies were bound and sewn into sackcloth and then unceremoniously dumped in a grave with no marker to show they ever existed, even Richard III, an anointed monarch suffered the same fate only two years later.
​
It is thought that Pontefract Priory was their place of burial, and this is where the remains of Anthony Rivers and Richard Grey may still lie, not the fine tombs they intended.
​
​History tells us that Vaughan's remains would eventually be in the placed in a tomb in Westminster Abbey. How ironic is it that Thomas Vaughan, the least important of the three, received a burial among kings and poets? It would be if it were true. I have my doubts. My research into Vaughan's family leads me to believe it is another Thomas Vaughan who lies within this Abbey, but that is a tale for another day.
​

The Vaughan tomb lies in St John the Baptist Chapel, in Westminster Abbey, it has been is described as thus:

“A grey Purbeck marble tomb chest stands in an arched canopy, with space at the west end for a priest to kneel and pray. His coat of arms (re-painted) appears
above with two defaced shields in the arcades - a saltire for Vaughan, quartering  "gules, a bend engrailed or between three fleur de lys,or". On the top of the
chest is the remains of the three foot high brass figure of Sir Thomas dressed in plate armour but with no helmet or gauntlets. His head rests on his crest of a
unicorn's head and his sword hangs from the middle of his belt. The feet have been broken away as have shields above the figure and on the top and side
of the chest.”

Running around the edge of the tomb can be found the following inscription, each word divided by badges of the rose and sun.