William de Mohun may be depicted in the image above being encouraged to fight by his charismatic leader William the Conqueror according to Norman chronicler Robert Wace.  Wace wrote regarding Mohun

We do not actually know what he really meant by the statement. Mohun was certainly important among the Conquerors men at arms, the vast amount of lands he was rewarded is proof of this. It could be that ‘many companions’ fought under him at Hasting but I don’t think that this is the case, there is no evidence that William de Mohun actually fought at Hastings, his name is certainly not among the ten or so men proven to have been at the battle. It may be that these men were retained by Mohun and in his service after he arrived on English shores. Either way we cannot be sure.

​After the conquest of England, Mohun held vast sways of land in the south west, far too many to mention. 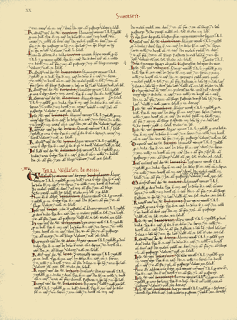 The Domesday book showing lands controlled by William De Mohun in 1086.
In the Domesday book the town of Dunster goes under the name of Torre and Dunster, it is a derivative of a pre conquest Saxon named Thane Dunna, who founded the settlement on the hill on which Mohun built his motte and bailey castle. At 1086 Dunster's value to Mohun was £0.8 compared to its value in 1070 which was £0.3
The manor had fifteen small holders and enough land for one plough, it also had five acres of meadow, thirty acres of pasture and two mills.

​Even before the arrival of the Saxons there were settlements here as evidence of people living in the hills at Dunster over three hundred years before the birth of Christ can be found.
​
Seven hundred years later the Saxons had arrived settling on the Torre itself and on the bank of the river Avill which runs close by.

Avill Valley
Looking at the views from the castle we can see why Mohun chose Dunster as his ‘caput baronie’ it had a wonderful strategic position in which to show the rebellious local population who was in charge. 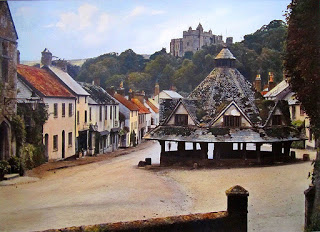 Market Place Dunster
The village of Dunster prospered with the arrival of this family and by 1197 it was described as a borough and by 1222 had a market and became a centre of the woolen industry. It had a established mill by 1259. 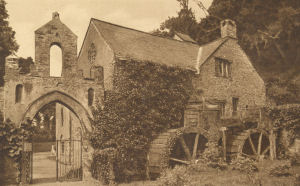 Dunster Mill
Nothing is known of the parentage of William but his brother Wilmund is named in a charter to the monks of Bath. Wilmund probably followed his brother to England after the success at Hastings. In 1084 and 1086 William was Sheriff of Somerset and was sometimes known as William the Sheriff. His estate at Stockland came to be known as 'sheriffs town’ gradually this name changed to Shreveton then to Shurton. In the same vain, his manor of Sheriff’s Brompton eventually lost its name and became Brompton Ralph when held under Ralph son of William son of Durand de Mohun. Durand was earlier known as Durand the Steward but he later was known as Durand de Mohun. It is not known if he was a relative of William or one of the above mentioned companions, or a tenant in Normandy who was retained by the Mohun family.

We have to assume that William was married before Hastings if the statement “Le Viel Willame de Moion” means he is the elder of two William Mohuns, and again we must assume that his wife was not English. William's wife was Adeliza, her heritage is not known. Williams children by Adeliza were Geoffrey, Robert and William. The elder two sons names appear in the above mentioned charter, but like their mother nothing is known. They were probably born within the first three years of their parents marriage, their third son William is not mentioned in the charter, we must therefore conclude that he was born after the Bath Charter was written. Seeing as William later inherited all of the lands and manors of his father it would be likely that the two other sons had died. 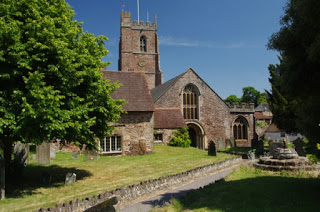 Present day St Georges Dunster
William and Adeliza’s church at Dunster, St. George’s built c 1097, was given by the couple to one John de Villula, the newly appointed Bishop of Bath. Mohuns church, various lands and tithes were added as a cell to Bath Priory of which only the West and North door remains. 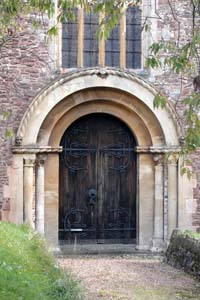 One of the two remaining doors of the Priory of Bath
Around the same time as William and Adeliza were making large donations to the church to secure the safety of their souls they were also making arrangements for the marriage of their son and heir. Like all high ranking nobles in his position William was eager to increase his status, wealth and power, it seems that William de Mohun name and influence reached as far as the fen lands of Lincolnshire for arrangements were made to unite his house with that of the Gant/Gaunt family who were Earls of Lincoln.

The last reference to William and Adeliza is the aforementioned charter to Bath Abbey which can be dated to some time between 1090 and 1122, but the exact date of his death and that of his wife is not known for certain.

William was buried in the Priory at Bath.

In the middle of the 11th century when the Mohun’s were organising their sons nuptials they were not the only ones doing so, Henry I was also making plans for his sons marriage. Eventually the king married his sixteen year old son William Adelin, to the eight year old Matilda of Anjou. This marriage, between two very young people took place in 1199. This event was followed a year later by the tragic death of William on board the White Ship which plunged the country into what is now known as the Anarchy and it was during this period in time that the next generation of Mohun’s were to make their mark.