John Hendley was my 16th great great uncle, he was the first of the four brother to leave a Will, the information that John’s Will provides forms the foundation of the Hendley’s story. 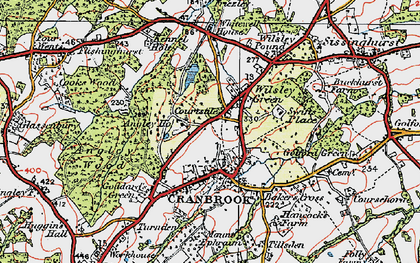 Cranbrook’s main thoroughfare runs in an east-west direction. High Street can be see in red then turning to yellow as it changes to Stone Street in yellow.
In 1472 John lived in a house on Cranebrooke Street - a messuage or a ‘dwelling house with outbuildings and land assigned to its use’ which may have been situated on the High Street (Cranebrooke Street no longer exists) His other holdings were two pieces of land, a four acres parcel with a messuage and a property with lands on which a tenant called William Kyngesdown lived.  In addition to these three properties John held sixteen acres of land, which he had newly purchased from one Herry Bettenham plus eighty-nine other pieces of land and 32 acres of land off Cranebroke Street. In his will he writes of his wife Mercy and their three children Thomas, Johanna and Alice. At the time John’s will was written, the 8th November 1470, Mercy was pregnant  - ‘if it be an heir male my wife goeth withal then it shall have the lands I late purchased from Herry Bettenham …’  John Hendley died between the 8th November 1472 and the 2nd December when the Will was proved.

Under the rules of inheritance or primogeniture men were favoured over women, but only the eldest male inherited, if there were no male issue then any daughters inherited together as co-heiresses. John Hendley’s Will makes provision firstly for his soul, secondly for his wife and heir Thomas and lastly his two daughters, and as we have seen there was land put aside for his unborn baby if it be a son. Thomas, I believe was younger than his two sisters, he was possibly about two years old in 1472, Johanna and Alice being aged about six and four respectively, the children then where under age on the death of their father and John had made provision for this. Mercy, his wife was granted all the estate for twelve years after which Thomas would inherit and would to hold his lands in fee simple, that is have full ownership of all properties and lands. Because of the children's ages the responsibility for their upbringing, that is their education, their arrangement of marriages and control of their lands were left hands of their uncles, Thomas and Richard Hendley. Thomas and Richard would only relinquish this role once each child was married.  John Hendley abided by the law of primogeniture by stating that if Thomas was to die and leave no issue then the lands would pass the next male heir which in this case was another John Hendley, his godson and cousin. All Johanna and Alice Hendley had to look forward too was a good marriage on which they were to receive twenty pounds each.

​John also left a number of other bequests, St Dunstan’s, where he asked to be laid to rest in the churchyard, he left twenty shillings, and to three priorities he left each the sum of three shillings and four pence.