The Decline of Dunster Castle
​Pilgrimage and England under an absentee King.

Under the progenitor of Mohun's  the family profited after the conquest, but later generations suffered the consequences of bad decision making during the time of the Anarchy. The latest Mohun inheritance was a decaying castle, a fragmented country governed by a king who ruled from a distance.
​
William, the forth generation with this name, was under age at his fathers death, he became the ward of the King Henry II. The Bishop of Winchester was soon appointed to look after him and to administer his estates.  Parts of the manor of Dunster were falling into disrepair and the tolls on the land were not bringing in what was expected, the mills too were showing a decline in revenue but on the other hand the King was receiving a large sum of money for the sale of corn and wine that was produced on other parts of the Mohun estates. During Williams wardship Henry II allowed 18 shillings for his maintenance.
​
​When William came of age he received his fathers manors and Dunster Castle, he had also married a woman named Lucy whom nothing is known. 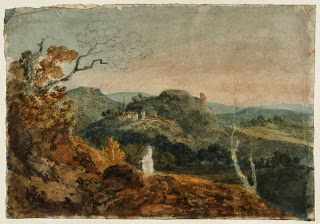 By 1177 William was receiving large profits from these lands, like his father and grandfather before him gave parts of his wealth and land to the church to secure the well being of his soul.  The fear of eternal damnation and the hope of eternal bliss were the driving forces that motivated people of this time and the Mohuns were no different, religion was of prime importance and would have influenced everything they did.  Mohun asked of the canons of Bruton Priory that on every anniversary of his death candles should be lit in his honour, and prayers should be offered for the soul of his mother Godehaut.  Documents to this affect also suggest that he had made arrangements to go on a pilgrimage to Jerusalem, and it is possible that he died abroad. 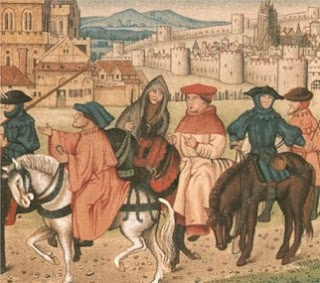 Although the family were personally wealthy they had ceased to be close to the royal court but were, never the less, one of the many powerful feudal barons of the country.  The date of Williams departure is not known, he may have still been in England when he heard about the death of King Henry II in 1189 and the coronation of Richard I that same year. His decision to go on a pilgrimage to Jerusalem would have been an important spiritual one, he may have thought of going to a special site of some religious significance such as the burial of a saint or the site of a miracle, but it was more than likely that had a strong desire to receive God's favour in the Holy Land itself, he also may have been motivated by the death of his first born son and the spiritual well being of his remaining child.  For whatever reason, William left his wife and infant son to more or less fend for themselves for there is no mention of any arrangements for the education of his heir and the management of the estate if he did not return. In Williams mind, apart from a secure place in heaven, the Holy Land was the place where he could feel nearest to his lord and this passion surpassed that of physical and financial needs of his family.

As we have seen, William had prepared his soul for the journey by organising prayers to be said in his name. On this journey Mohun faced many dangers including robbery, enslavement or even death, we do not know if William made it as far as Jerusalem, if he did he may have travelled the last part by ship and then conditions were just as bad, the ship would have been rat infested and in great danger of being attacked by pirates.
Life on ship, according to one English pilgrim

'is right smouldering hote and stynkyng'.

William and Lucy had had two sons, William and Reynold.  The above named charter to the Augustinian canons was witnessed by the couples elder son William who was only a child at the time, he died soon after for he predeceased his father. The younger son Reynold became his fathers heir.  As mentioned, it is not known when William embarked on his long journey through Europe to the Holy Land or what preparations he had made regarding his family but he left them in a country that teetering on the brink of rebellion ruled by a absent king.

King Richard I was a rebellious young man who had frequently challenged his fathers authority and had continuously been a thorn in his side. At the age of sixteen, Richard joined both his brothers, Henry and Geoffrey, in a revolt against their father whom they sought to dethrone. At an early age he showed significant political and military ability, becoming noted for his chivalry and courage, these facts along with his physical presence, he was said to be very attractive; his hair was between red and blond, he had light blue eyes and a pale complexion all of which secured his popularity with the masses, he was also a viscous and cruel man. When crowned King of England, he barred all Jews and women from the coronation ceremony some Jewish leaders nevertheless arrived to present gifts for the new king. On his orders Richard's courtiers stripped and flogged the Jews, then flung them out of court. When a rumour spread that Richard had ordered all Jews to be killed, the people of London began a massacre. Many Jews were beaten to death, robbed and burned alive, many Jewish homes were burned down, and several Jews were forcibly baptised, some sought sanctuary in the Tower of London others managed to escape.
​Baldwin of Exeter the Archbishop of Canterbury reacted by replying

"If the King is not God's man, he had better be the devil's”

Richard soon realised that his actions could destabilise his realm, on the eve of his departure on crusade, Richard ordered the execution of those responsible for the murders and persecutions. Those who were hanged were not his henchmen, but rioters who had accidentally burned down Christian homes, and to make sure that people took him serious in his actions he issued  a royal writ demanding that the Jews be left alone. Not surprisingly this was not taken seriously, the following March there was further violence, including a massacre at York. Richard swore an oath to renounce his past wickedness in order to show himself worthy to take the cross. He started to raise and equip a new crusader army. He spent most of his father's treasury, raised taxes and sold official positions and lands to those interested in them. Even those already appointed were forced to pay huge sums to retain their posts including the Bishop of Ely who bid £3,000. William Longchamp coughed up an equal amount to remain as Chancellor.

Instead of leaving his younger brother John in control of England in his absence he appointed as regents Hugh, Bishop of Durham and William de Mandeville who soon died and was replaced by William Longchamp. It comes a no surprise then, that John was not satisfied by this decision and attempted to overthrow Longchamp, John was more popular than Longchamp in London, and in October 1191 the city opened the gates to him while Longchamp was confined in the tower. John promised the city the right to govern itself  in return for recognition as Richard's heir presumptive. Some were in support of John as Richard only spent six months of his reign in England and emptied  the kingdom's coffers  to pay for his crusade. According to William Stubbs in The Constitutional History of England

“ He was a bad king: his great exploits, his military skill, his splendour and extravagance, his poetical tastes, his adventurous spirit, do not serve to cloak his                     entire want of sympathy, or even consideration, for his people. He was no Englishman, but it does not follow that he gave to Normandy, Anjou, or Aquitaine
the love or care that he denied to his kingdom. His ambition was that of a mere warrior: he would fight for anything whatever, but he would sell
​                                           everything that was worth fighting for. The glory that he sought was that of victory rather than conquest. ”

Richard said of England it is "cold and always raining," and when it came to raising funds for his Crusade, he was said to declare,"I would have sold London if I could find a buyer."  But what we do have to remember is that to the king, his nobles and royal household, England was just a  part of the vast estate they governed, Richard felt more French than English and therefore put the people of this land second. The Plantagenet kings before the 14th century had no need to learn the English, a language of a people they really new nothing about. Although England was a major part of his territories Richard faced no major internal or external threats during his reign, it was his French territories where he felt that he was needed.  He left England in the hands of various officials, including, at times his mother. This meant that Richard was far more concerned with his more extensive French lands and he either did not know or care that the people of England were being subjected to the greed of feudal barons, contemptuous sheriffs and as history puts it the ’wicked and cowardly John’.
​
John was no hero he was untrusting and he too was selfish but he took it upon himself to take control of a country that might have easily fallen into the hands of unscrupulous barons. 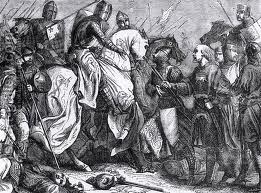 Mohun however, was continuing his pilgrimage when Richard I finally met his end during fighting in France and John soon became king.
Richard I and probably William Mohun never returned to England alive.

The date of Williams death is said to be October 1193 leaving his heir Reynold, a minor. It is not known where Williams body lies. In death, as in life, the welfare of his wife and child was of no consequence to him. There is no record of either of them during the first ten years of the child's life and there is no mention of him as being a ward, his lands however were known to be managed by at least six barons loyal to King John.
​Dunster was taken by William de St. Mere on behalf of the crown, the manor of Moyon, the Mohun estate in Normandy, was taken  by one by Richard de Humez.
​