It has been estimated that in the 11th century there were only 27 persons to the square mile in Devon, and it stood thirteenth in the country in order of density of population. Devon was underpopulated, underdeveloped and poor. However, the 12th and 13th centuries were periods of immense change.  Free movement of peasants who had land granted to them by their lord increased the number of new settlements. During the reign of both Richard I and King John we see these freehold estates turning into what we know now as parishes. The hamlets of Hoo Meavy, Good-a-Meavy, High Meavy, Maker Meavy and Meavy itself would all be regarded as a parish, by the beginning of the13th century they would have a new lord over them. ​ 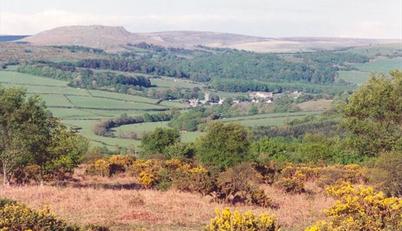 ​Along with the development of parishes, new towns appeared, and it is this era that heralded the arrival of the Borough, places where tenements created by rural lords that were to be held in burgage - that is, buildings held by payment of rent. Between 1160 and 1200 in the Pipe Rolls and the Red Book of the Exchequer, a book containing correspondence, religious and legal writings, so called because of it red leather binding, we can find the names of the weather gentry of Devon appearing, names such as Raleigh, Courtaney, Giffard and Bonville. Also listed are names of families who would later be linked by marriage to the Meavy’s, names like Dinham, Champernowne, Dennis, and Worth. Unlike the families of Norman descent, the Pomeroy’s at Berry Pomeroy castle and the Courtaney’s at Oakhampton Castle, the Meavy family were destined to live in a small manor house and not to move any further up the social ladder than that of landed gentry, they may have been rich and held positions of importance but they would make no impact in the country itself. However, just like their castle owning neighbours and even their king, they were in one way equal to those destined for greatness, their destiny and eventual fate relied upon the production of sons. ​ 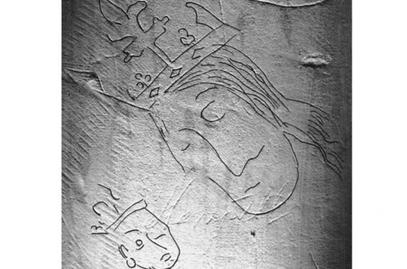 Incidentally, the chances of producing a male, according to a study by Newcastle University in 2008, increases if the father has more brothers than sisters. In respect of King John, who was sitting on the English throne when a new generation had taken up residence at Meavy, this is proved to be the case. Out of ten children born to Henry II, seven of those were male, however in regard to the Meavy family there is no evidence to prove either way, for the future of this family was held in the tiny hand of a daughter.

Gilda Meavy was born into a time of tension and favouritism within the royal family, this favouritism threatened to be exploited by a foreign power, that left unchecked, could plunge the country into chaos, however the sons of Henry II managed this all by themselves without any outside help. The death of Henry in 1189 left the country in the hands of his third son Richard, a continuous thorn in his side and who, along with two of his brothers, had taken up arms against their father whom they sought to dethrone. Richard’s death, ten years later, in the arms of his wailing mother, left John to pick up the pieces and run the country on an empty treasury.
​
Life for the Meavy’s continued much as it had always done, however their new king, despite all his privileges was disadvantaged from the start - squabbling parents, a youngest son, a spoilt and show off older brother, grumpy barons and a bankrupt country. Once crowned, John argued with his nephew Arthur over the succession. John was in France by the end of 1202, he was still in France in 1203 trying to gain control of lands there held by English barons. By 1205 the struggle over the succession with Arthur eventually led to the loss of English territory in France. For the rest of his reign, John continued raising taxes to pay for his campaigns. His time a king of England is remembered for the trouble he had with his barons, by 1215 they had had enough of paying for Johns campaigns with this extra taxation, and John, wearied by disloyalty and his excommunication, did not take the chance to reconcile himself with these barons, they rebelled and captured London in May 1215. A month later at Runnymede the king agreed to their demands and begrudgingly signed Magna Carta. However, seven years after becoming king, John succeed where Wido Meavy did not, his wife gave birth to a son. Henry III turned out to be an intelligent man who was quick to master the problems of administration and government, he was also seen as an "uncomplicated, almost naive man, and a lover of peace." It seems then that England would, at last, be a calm and peaceful country, however this was not to be. In our tales of history, the events of 1258 to 1264, were played out through the actions of a man who would come to be known as "the father of the English parliament" - Simon de Montfort. In this Henry III hardly get a mention, historians preferring to write about de Monfort, who not only threatened to steal Henry's crown but also his limelight. Chronicler Matthew Paris describes Simon de Montfort as dictatorial and a military strategist, stating he was charismatic, plain spoken and fair. Interestingly, one of the reasons de Montfort took a dislike Henry III was because of his favouritism towards foreign nobles - he did however, conveniently forgot  the fact that he was a favoured foreigner himself! ​ 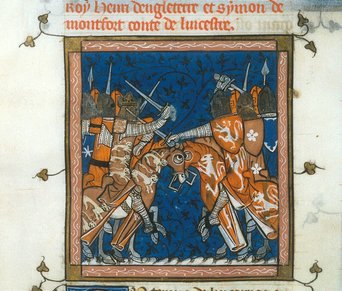 Henry III versus Simon de Montfort, from the British Library manuscript Royal 16 G VI
Despite both John and Henry II producing male heirs we have just seen that their dynasty was far from secure, the Meavy’s too were on the brink of losing control of their land, their future depended on them finding a suitable husband for their daughter.

The descent of the Meavy family through the generations have been lost to us, but by the middle of the 12th century we can see, for three generations at least, the names of those who inherited the family estate. From 1168 Meavy passed from Walter, through his son Wido,  to Wido’s daughter, the above mentioned Gilda. By 1202, both Walter and Wido were deceased and holding the title of head of the family was one William Meavy. William had taken up this position by right as husband to Gilda, and he can be found going by his wife's name in documents of the time.

Inheritance of land and property was governed by primogeniture, a law that saw a family's eldest son inheriting the whole of the family estates, younger sons got little or nothing - King John was nicknamed Lackland for just this reason. A daughter would only inherit if there were no eligible males within the family.  If there were more than one daughter then a kind of gavelkind would take effect, that is the estate divided in equal portions. We can see an example of this in the descent of the Meavy family in the 15th century where an estate was divided among seven Myliton daughters, (the 3x great grandaughters of Alice Meavy, the last of the Meavy line.)  Who exactly William was, I have found no real evidence, however his place as head of the family may have been gained as a Meavy cousin or kinsman as he appears as William de Mewi in documents dated 1202 and 1228 when he witnesses in a quit claim between Richard de Bulepitte and Walter Giffard of Halsbury whose family were descended from Walter Giffard, the 1st Earl of Buckingham.

It is during William’s time at Meavy that we get our first piece of evidence appertaining to their role in local government. At the beginning of the 13th century local courts were full to bursting with cases regarding the ownership of land, land that men like William considered theirs by right. In 1202, William added a condition to his confirmation grant that he, and his heirs, be allowed to continue as a free tenant of the lands granted to Plympton Priory. Land ownership and the trouble that went with it was not the only problem landowners were facing. Affecting land up and down the country was the new Forest Laws that had been implemented by King John, which directly affected the Meavys. The Norman system - the aim to repopulate and cultivate the moors and heaths of Devon, that saw farming families like the Meavy’s granted extra land, was undermined by John’s new law. It prohibited the right of landowners to enclose land and pasture their stock, it reduced families access to food and fuel and restricted the growth of the manor, putting a stranglehold on the opportunity to climb the feudal ladder. By the middle of the 13th century the Meavy family had indeed climbed that ladder, and if they ever considered their roots, the would be able to say that their situation had improved; their wealth and newly found status was simply the result of money made through farming. At this time agriculture was by far the most important part of the English economy, pasture farming produced wool and meat, arable farming produced grain and root vegetables. Cider making, that has its roots in this century was also part of manorial routine, enough was made that it created a regular source of income, the bailiff's accounts for the estates of the Earl of Devon, the aforementioned de Redvers and Courtenay families for instance, show that cider was produced on such a large scale that enough was left at the end of one year to carry over to the next. Landowners who ran their estates successfully could make vast profits from the sale of their goods added to that were the collected rents from those who lived and worked his land. At  Meavy these rents were paid by the descendants of Alwin, the king's thane who resided at Meavy in the time of Edward the Confessor. Precisely what William Meavy produced on his lands is not known, however with the village standing on the edge of Dartmoor, it is likely to be pasture rather arable farming. Less crops were grown in this area and according to the Domesday Book, there were few plough teams, so farming was predominantly cattle and sheep. ​​ 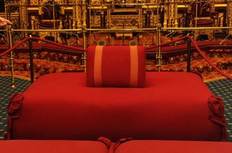 After the conquest of England the Domesday survey showed that there were more sheep kept in Britain than all other livestock put together. Wool was important the England’s economy, it was the mainstay of European textile industry who were heavily dependent on English raw wool. The importance of wool is reflected in an order of Edward III, the king saw to it that his Chancellor sat on a woolsack, a large bale of wool covered in red cloth, a tradition that continues to this day in the House of Lords. 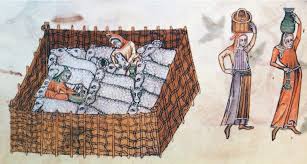 Under the heading of ‘gifts’ in a confirmation grant in the reign of Henry II it notes that Richard, Earl of Cornwall granted Plympton Priory "twigs from dead wood for the making of their sheepfolds." It has been noted that sheep from this area in Devon produced low quality wool that was not suitable of export, so these were kept for milk production and the making of cheese. Most of Devon's abbeys and priories kept sheep, tenant farmers owned a few, the great landowners would own thousands, of the Meavy’s stock of sheep however, that was probably somewhere in the middle, likely be a couple of hundred that would be rounded up for shearing in the farm yard of their newly built  manor house, proof that this family had come along way from their beginnings residing in their Anglo-Saxon straw thatched hut.

​Meavy Barton house, as it is known today, with its two-storey stone barns, cart house and piggeries, was not as grand as other 13th century manor houses in the area
but the social standing of the Meavy family would be clear for all to see.