The Welsh territory that would later become Monmouthshire, was originally part of the Welsh kingdom of Gwent. Following the conquest of England by William the Conqueror, it became part of the Welsh Marches. In 1535, under the Laws of Wales Act, Wales became part of England, a single state under English laws, since then its Englishness/Welshness has become a subject open to interpretation.

The town of Monmouth itself, is mentioned in the Domesday book, its castle, that stands on the River Monnow, was the birthplace of Henry V and it was from this area that many longbowmen followed the king to Agincourt in 1415. The Lancastrian family held Monmouth Castle from the 13th century right up to modern times, and it was the Beaufort family who were responsible for kick starting Thomas Vaughan’s career.

To the south west of Monmouth lie the lands once owned by the Vaughan family of Bradwindine. This family can trace their ancestry back to the Norman Conquests and their descent through a number of Anglo-Welsh nobles. There are those who have written that Thomas Vaughan is of this family, he is not, naturally this has caused much confusion, and to a certain extent it is understandable, for there were at least three men with the exact same name living at the same time, one of the three is Thomas Vaughan, son of Roger Vaughan and Margaret, daughter of James Tuchet, Baron Audley, the widow of Richard Grey, Lord Powis.  This Thomas was active mainly in Wales, having a role of some importance in the south of the country. At the end of 1473 and into 1474 he was an esquire to the body of Edward IV, he supported Richard III against the Duke of Buckingham in the October of 1483 and was granted a pardon by Henry VII in 1486. The Vaughan's were a rich and influential Welsh family, Roger Vaughan had received the lands and castle at Tretower which lies in the historical county of Brecknockshire via his half brother William Herbert, Earl of Pembroke. Eventually the families power and prominence in Wales diminished, a result, no doubt, of the execution of Roger Vaughan in 1471, however the mighty Herbert and Devereux families, who the Vaughan's were connected via allegiance and by marriage, continued to play an important part in Richard III’s reign and later in the Tudor and Elizabethan era.

So we know who Thomas Vaughan was not.

Who was he then? ​
​​
​Well, we know he was Welsh, we know that he was important to Edward IV and we know he was with Edward’s son at Ludlow and with him on the night of the 29th April 1483 and we know, or we think we know, he died along with Rivers and Grey in the power struggle between Richard Duke of Gloucester and the family of the newly deceased king.

​ This Thomas Vaughan was either born in Monmonth or a village close by to Robert and Margaret Vaghan.

© National Archives​
“Thomas Vaughan, knight, Treasurer of King Edward IV and Chamberlain of his first-born son, Edward, Prince of Wales
Robert Vaghan, esquire, and Margaret, his consort, father and mother of the said Thomas
('pro animabus Roberti Vaughan armigeri patris eiusdem Thome et Margarete eius consort matris sue)”
1477 Defeasance by John, Abbot of Westminster and the Chapter of Llandaff.  ​
Vaughan was born just over twenty miles, as the crow flies, from the Vaughans of Tretower, it is highly likely that the two families knew each other. Robert Vaghan, as it was written in the above deed of 1477, is said to have been an esquire, in this period this title could mean a number of things. He could have been the son of knight, he could have held a position that was created by the king, or employed within the community, a Justice of the Peace for instance.  I certainly find it puzzling that a man like Thomas Vaughan should rise to such an important position in the royal court, be entrusted with the heir to the English throne but the career of whose family, either through their affairs on a local level or nationally are not mentioned. Even ‘low born’ men such as those, whose fathers were butchers or blacksmiths, like Thomas Wolsey and Thomas Cromwell names have been recorded for posterity, it seems though that Thomas Vaughan’s family were so unremarkable that they have passed into history unrecorded.

In the Crowland Chronicle,  Thomas Vaughan was called an ‘aged knight’, taking into account the events of his early career, and that the average age of death of a male in this period was 48.9 we can estimate the date of Vaughan’s birth could have been anywhere between 1410 and 1430. 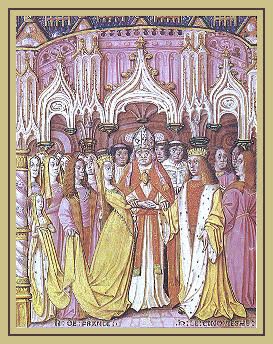 As Thomas Vaughan lay in his cot, Henry V had been working to force the French to sign the Treaty of Troyes, and he had succeeded in the May, he followed this by marrying Catherine of Valois.  The couple returned home to England, six months later Catherine was crowned queen and two months later, Henry returned to France. The young queen gave birth to her son Henry, later Henry VI, in the December of 1421, but the of hero of Agincourt lay dying from dysentery at the Chateau de Vincennes in France. His death left his nine month old son, king of England and within a year king of France. Control of the boy and the country was left in the hands of Henry V’s two brothers, John, Duke of Bedford and Humphrey, Duke of Gloucester. By 1427, nineteen year old Edmund Beaufort had arrived on the scene and Owen Tudor, grandfather of the Tudor dynasty, having obtained position within the household of Henry V’s queen, was hanging around in the wings.

It was into an England, with a political unease bubbling away beneath its surface, that Thomas Vaughan was born.

A protectorate, an under age king, in house squabbling and eventually two Welsh half brothers with their feet under the royal table could only mean one thing………
trouble!

The years 1420 to 1425, were years that saw the very beginnings of a change, just like on a giant chess set, people had begun taking up their positions, albeit unknowingly, and as each move was taken it directly affected how the game turned out.

And Thomas Vaughan as a pawn, was still at the breast of his wet nurse.
​
Chapter Two:﻿ The Beaufort Patronage