Smith of Barkby in Leicestershire

Introduction
The County of Leicestershire covers an area of eight hundred and thirty two miles and is divided into eight districts, including the City of Leicester, which sits at its centre. Leicestershire has long been associated with farming, engineering and textiles. It was agriculturist Robert Bakewell who farmed just outside Loughborough, who was cited by Darwin in his Origin of the Species for his work in selective breeding. In John Taylor's Loughborough Bell Foundry, Great Paul, Britain's largest cast bell, that now resides in St Paul's Cathedral, was made. The stocking frame invented by William Lee in 1589 would appear in Leicestershire homes at the very beginning of the 17th century. This stocking frame would create employment in the county right up to the present day - interestingly, at the time of writing the textile company Wolsey, established in Leicester in 1755 and one of the oldest existing textile companies in the world, closed it factory.

The district of Charnwood is an area that lies to the north of Leicester, it takes its name from the Charnwood Forest. It was the home of coal mines and the aforementioned stocking frame industry, and it is in this one district that a quarter of my paternal ancestors originated. The villages in which my ancestors lived surround the forest. Lying on the forest’s north-west side are the mining communities of Thringstone, Whitwick, Colorton and Swannington, to the north-east are the towns that are associated with the framework knitting industry that of Loughborough, Syston and Wymeswold. Just over thirteen miles to the south-west lies Hinckley (a separate district that is combined with Bosworth) that too is associated with textiles. 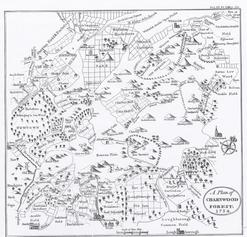 In the 18th century industry would take over from the traditional dependency on the land and the mills would see the end of the framework knitter’s cottage industry.
With the arrival of the canal, and later the railway, individuals and whole families, who had lived in Leicestershire’s villages for generations, would leave to seek work elsewhere leading to an increase in population that would cause some villages to become towns. The population of the village of Syston would almost double by the middle of the 19th century, and the City of Leicester’s border would gradually creep outwards into the countryside, so much so that the small village of Barkby, that once lay just over four miles from the city itself, now lies just over one mile. The encroachment of larger towns into the countryside engulfed villages in its path - the village of Thurmaston for instance is now a suburb of Leicester.

​Agriculture had been the mainstay of Leicestershire’s economy, an economy which was based on small farms, most with under one hundred acres of land that specialised in arable, dairy, and stock rearing. Agricultural labourers lived in accommodation on the farm on which the worked or in houses rented in their village. The world of farming was still based on the old feudal system made up of labourers, tenant farmers and wealthy landowners, these landowners were no longer nobles but the ‘self made man’ - the gentleman. 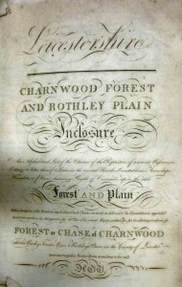 Cover from the printed list of claims of proprietors in respect of the enclosure of Charnwood Forest.
It was these gentlemen who used the new Enclosure Act for financial gain, the wealthy landowner gained much but it was the agricultural labourers and their families who suffered, just like in Tudor times when families who had the least, lost the most.  From the middle of the eighteenth century enclosure by parliamentary act was seen as the norm, in just over three hundred years over 5,000 enclosure bills were enacted which meant that just over a fifth of the total area of England, that is over six million acres, was in the hands of private individuals and it was one of these landholders that holds the key to accessing the life of my Smith ancestors.