The Story of 13th Century Weavers and Cloth Merchants

Introduction
The roots of the Hendley family are embedded in the Weald, an area that has been described as "the place where London ends and England begins." 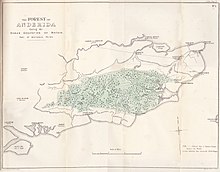 Map of the Weald featuring the Roman Forest of Andredes
​​The Weald, the Saxon word for woody country, in ancient times was nothing more than a wilderness covered with forest that for centuries was only cleared and tilled on behalf of the Saxon kings, it was not however allotted into tenancies as was the norm in the rest of the country. The eventual ownership of land was claimed in stages over time until it would belong to families like the Hendleys.

This family appear in official documents in the mid 14th century during the reign of Edward III - a time of disease, warfare, patriotic fervour and political instability. Edward III was king of England for fifty years, his reign would be turbulent and bloody. His childhood was spent during the struggle for control of the government, his teenage years saw the imprisonment and the other throw of his father by his mother Isabella of France and her so called lover Roger Mortimer and when we meet Gervais Hendey, the progenitor of the family, the country Edward ruled was three years into the Hundred Years War and the Black Death was four years away. The end of the century saw the death of Edward's heir the Black Prince and the usurpation and murder of Richard, his grandson, the fall out of which would reverberate down through the centuries. Richard II would be king of England for over twenty years, but his crown was forcibly taken from him by his cousin Henry of Bolingbroke on the promise, that if he gave up the throne he would not have him executed. Bolingbroke broke that promise by abandoning him in the bowels of Pontefract Castle where he died a cruel and miserable death.
Henry of Bolingbroke would be crowned King Henry IV just twenty-five days after Richard abdication on the 19th August in 1399. Bolingbroke would be at the head of a new dynasty that would go by the name of the House of Lancaster. Bolingbroke, as Henry IV would, just as Henry Tudor would do nearly eighty-five years in the future, have to work hard to prove that he was the rightful king and not a usurper who had taken the throne illegally. It was in the period between Edward III's success at the Battle of Crecy and the end of what history calls the Wars of the Roses in 1487, that the Hendley family came to prominence.

Later Hendley descendants would be among the men of Kent who would cause trouble for Henry VI, in the form of the Jack Cade Rebellion, but they would also be among those Kentish men who were important in the court of both Henry VII and Henry VIII. They would later take the side of the Parliamentarians against Charles I in the English Civil wars.

My family line, in name at least, would end with the death of Elizabeth Hendley in 1596. The Hendley name and much of their lands passed through a branch of the family descending from Elizabeth's paternal uncle until the end of the 18th century when the last male heir died a lunatic.