The Anarchy
The great conquering family known as the Normans ruled England under that name until the death of Stephen in 1154, Stephen's uncle, Henry I had inherited the throne of England from his brother William Rufus following a hunting accident in the New Forest in Hampshire.

Rufus was a good soldier and had strengthened England's borders, and Henry had governed well and introduced new courts and laws. Where Rufus was harsh and severe, a bad tempered flamboyant peacock who heavily taxed his  people and quarrelled with the church Henry, according to Henry of Huntingdon, an English chronicler, was endowed with three gifts, that of wisdom, victory and riches, but he also writes that these were offset with three vices, avarice, cruelty and lust. Henry’s personally changed  in 1120, when his only son William Adelin died in the White Ship disaster, this accident plunged the country into what has become known as The Anarchy, an era of broken promises and a major fallout between cousins over the empty throne of England. The crown was taken from Henry’s daughter Matilda by the above named Stephen of Blois before she could claim it, however in 1153, following the death of his son, Stephen agreed to make Matilda’s son Henry his heir. ​

When Henry became king he controlled more land in France than that of the king of France himself, however he was to spend much of his time on the English throne fighting to hold on to it. His reign is remembered as much  for his power struggle with Thomas Beckett as it was with his  relationship with his queen, Eleanor of Aquitaine. Unlike his great uncle William Rufus, Henry II was no clotheshorse, he cared little for appearance but he did love kingship, or at least everything that came with it. He was often rude and had a quick temper, quite a match for the wonderfully feisty Eleanor whom he married in the May of 1152. His children with Eleanor, among others, were Henry, Richard, Geoffrey and John.

13th century depiction of the Angevins (Henry II William, Henry, Richard, Matilda, Geoffrey, Eleanor, Joan and John)
King Richard I became king on the 6th July 1189 and reigned for two months short of ten years, he was a rebellious young man who had frequently challenged his father's authority and had continuously been a thorn in his side. At the age of sixteen, Richard joined both his brothers, Henry and Geoffrey, in a revolt against their father whom they sought to dethrone. At an early age he showed significant political and military ability, becoming noted for his chivalry and courage, along with his physical presence, he was said to be very attractive; with hair that was between red and blond, light blue eyes and a pale complexion, these facts secured his popularity with the masses. He was also a vicious and cruel man, he was dead from a gangrenous cross bow wound by the April 1199 leaving John to take control of of the country.

​In these years the Meavy family had at its head Walter, Wido and William Meavy, during these years as their kings battled their way through family feuds, battled on behalf of God in a foreign land or squabbled with their enemy's closer to home, the Meavy battles were still the day to day management of their manor which they held under the aforementioned Judel de Totnes. Judel was a shining star during the conqueror’s reign, but his brightness dimmed under William Rufus, who unceremoniously booted him out his lands for reasons that have not been specified, an undated charter confirms this stating that he (Rufus) expelled - “Juhello de Totenesio" from "hæreditatem eius" and granted it to "Rogerio de Novant.” Roger de Nonant was the newly created lord of Totnes, but what of Judel himself and his second barony, that of Barnstaple? After 1088 historian’s lose interest in him and there is almost nothing written about his later years or who held the Barnstaple barony, however a number of years later his son Alfred can be found in possession of it. Judel, it would seem, regained favour in the final years of Rufus reign and the barony of Barnstaple was returned to him. He was dead at the end of 1129 aged sixty. The transference of his land to his heir is documented in medieval Pipe Rolls (an annual financial records of the Crown) as “Alur fil Johel  terre partis sui” and is dated to 1130.
At the beginning of the 12th century the Meavy family were still socially and politically isolated from the events that were to shape England’s future, but they no longer remained on the peripheries of the troubles that affected their country, that is, the fight against the newly crowned King Stephen of Blois. In 1136, at the Siege of Exeter, it is likely that some Meavy men were part of Alfred de Totnes’s retinue under the command of the future Earl of Devon, Baldwin de Redvers.

In Devon as elsewhere, a number of powerful nobles had quickly taken against Stephen, but he had gained the support, not only from Pope Innocent II but the majority of the  English barons, however he was slow to agree new terms in regard to the powers and privileges that had been stripped from them by Henry I, it was Baldwin de Redvers, who was one of the first to take up arms against him. In the spring of 1136, it was reported to Stephen that Redvers was asking for extra supplies and it was obvious that he preparing his army for battle. The Siege of Exeter Castle or Rougemont Castle as it was known lasted three months, it ended when Baldwin’s forces ran out of water, and it is in the Gesta Stephani  that  we can read of the Meavy's overlord, Alfred de Totnes’s support of Baldwin de Redvers. Although the garrison was released without reprisals, it is interesting that that was the year of Alfred de Totnes’s death which resulted in the division of the Totnes and Barnstaple baronies. ​ 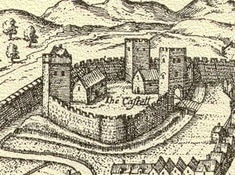 Alfred held his estates for the short period of six years, and it seems he was unmarried or at least had no heirs on his death. The barony Barnstaple passed to the families of Brarose and de Tracy via their marriages to Alfred’s sisters Eleanor and Hawise.  The barony of Totnes however had been part of the estate of the Nonant family since 1088 and since then the Meavy's overlord had been the family of Nonant.

The Nonant family's origins are obscure. Their name passes through five generation and ends with the marriage of Guy de Nonant’s (II) daughter Alice to the Beauchamp family at Ryme in Somerset, after this the family became extinct, at least in name, by 1330. The Nonant’s come to prominence in the first years of the reign of William Rufus. Roger de Nonant, was one of Rufus’s ‘south-west’ favourites, who received a portion of Judel of Totnes confiscated estates. Nonant’s name appears in a number of documents, he stood surety in the king's attempt to reactivate an alliance with the Count of Flanders and witnessed a number of royal charters. His name also appears in documents of a personal nature, including the king's charter in regard to the granting of the Barony of Totnes to him c 1088, that was confirmed later by William Rufus while he was in Normandy. Roger de Nonant was also one of the first benefactors to Plympton Priory and as we have previously seen in 1168 it was his son Guy who supplied evidence against Walter Meavy’s claim to the parcels of lands of his ancestors. 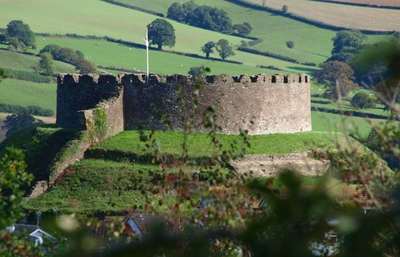 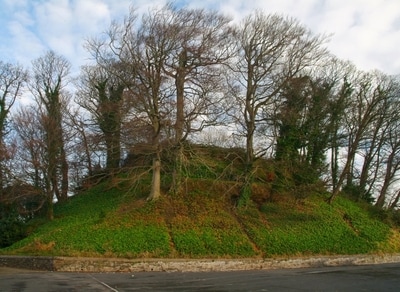 Totnes and Barnstaple Castles
As early as 1123 we can see Judel de Totnes, the Nonant's and the above mentioned Baldwin de Redvers appearing together as witnesses to Henry I’s charter to the church of Exeter, where the reference to Meavy land and Plympton Priory is made, but sadly there is no hint as to who was at the head of the Meavy family at that time or when Alfred de Totnes was overlord.

The Baroney of Totnes, that included the lands of Meavy had descended through Guy de Totnes's son Henry who died childless in 1206. The barony was then held in moieties with the Nonant half descending to the Vautort family of Trematon in Cornwall and the second half to William de Braose, whose claim was based on the fact that he was the grandson of Judel of Totnes. The barony of Barnstaple descended through the Braose and de Tracy family. However, by 1211, as the result of William de Braose’s involvement in the disappearance of Arthur, Duke of Brittany, all the Braose estates were claimed by the crown.

When Walter Mewi was head of the family, King Henry II was crowning his elder son Henry the Young King, he was arranging the marriage of his second son Richard and uttering his most famous words “Will no one rid me of this turbulent priest?”
Walter, Wido and William Meavy