All works © Andrea Povey 2015.  Please do not reproduce without the expressed consent of Andrea Povey.
Chapter One: Monmouthshire, Wales
Introduction
It was on the 25th June 1483 that three men were executed for treason at Pontefract Castle in Yorkshire on charges of conspiracy and plotting against Richard, Duke of Gloucester. These men were Anthony, Earl Rivers and Richard Grey, brother and son of Edward IV’s queen Elizabeth Woodville, the third man was Thomas Vaughan, chamberlain to Edward, Prince of Wales.


Pontefract was the largest town in medieval Yorkshire, Edward I called it the ‘key to the north.’ It's once mighty castle is in ruins today, but it is thought that the castle had, at one time, a two-walled outer bailey, John Leland, the Tudor antiquarian, described the castle as having ‘six roundells, three bigge and three small’ that made up the castle’s keep which he states as measuring 63-64 feet in diameter. Archaelogia, published in 1770 by the Society of Antiquaries of London, confirms this and suggests that within one of the three towers mentioned by Leland there was a

From the top of the keep you would have been able to look out towards the Derne Valley, today you can follow the railway line that takes its name from the valley as it makes its way toward Rotherham. In 1483, all that could be seen were fields and possibly the tiny hamlet of Ackworth whose inhabitants were accustomed to violence. 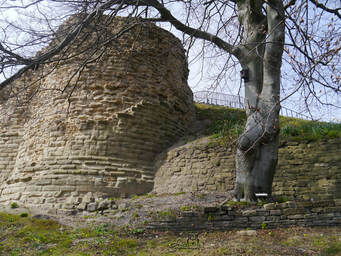 Pontefract Castle (Two Hoots Photography 2019)
These were barbaric times, but an execution within the walls of the town’s castle was nothing new, Richard II was murdered here in the February of 1400, Edward II ordered the deaths of Thomas of Lancaster and twenty rebels, they met their deaths here at Pontefract. Theses men's names and deaths are remembered, the names of the hundreds of other poor souls who died or were imprisoned during the Wars of the Roses are not.

There is no record of exactly where within the castle Vaughan, Grey and Rivers met their deaths. Maybe it was at ground level in the centre of the castle, or high up on battlements. What was Thomas Vaughan's last view of the world? Was it the grubby, hay-strewn castle floor or the vast green fields where men of York and Lancaster alike ended their days, we will never know, but within minutes, Vaughan's blood and that of his associates may have seeped through the stone work and ran over the castle walls before it flowed into the streams to join with blood spilt only twenty years before.

Thomas Vaughan’s story ends here in Yorkshire’s Pontefract Castle but it began in what is now Monmouthshire in Wales in the second decade of the 15th century.
​
Chapter One: Monmouthshire, Wales