Richard's life, like that of his ancestors, was spent in Braunton and again like his ancestors we only see a tiny glimpse of his life through his baptism at the
local parish church. Richard was baptised on the 21st July 1718, four years into the reign of King George I who had ascended the British throne as the first monarch
of the House of Hanover.  Of Richards marriage there is no record, neither is the surname of his wife she is only known as Gertrude.

Small farmers such as Richard had introduced a system of farming which combined dairy farming, the breeding or feeding of cattle, sheep, and pigs. Richard
probably grew corn and produced cider. The land was probably well managed, tilled by a two horse plough which by this time was a common site, not only in Devon but across country as a whole. 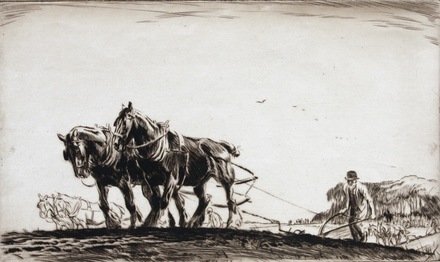 With a healthy young son to assist on the land, a wife and daughters baking bread at home, and images such as the one above it is easy to imagine
that the life of Devon farmer was an ideal one, but it was far from it. Richard's life would have had its lighter moments, but on the whole it was hard and grueling, this and other factors may have resulted in the death, probably in childbirth of his wife, for there is no mention of her at all after 1743. She had given
Richard three children, a daughter Mary baptised in 1737, another daughter Ann in 1739 and Richard who was baptised on the 11th June 1743.

​Of Richards daughters, again like nearly all their Hunt predecessors, nothing can be found, it was left to his son Richard to continue on at their small farm.
Richard Hunt