Mary Hunt
Mary Hunt was baptised at St Brannocks Church on the 12th June 1774 and was the fifth child born to Richard and Grace.
Mary would have grown up on the farm of her parents, as a child she would have been given a few tasks that she was expected to complete without a fuss. Also,
it may well have been Mary's responsibility to keep the farm's vegetable patch maintained. In this garden there would have grown a wide variety of vegetables that were used to feed the family. 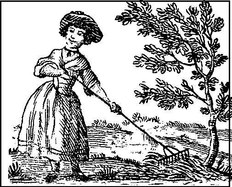 Nearly all farmers kept pigs and all kept chickens which could provide eggs. The feeding of the chickens would mostly be the job of the younger child after which
they would be progress onto milking the cows.  Cows were kept for their hides, milk, meat and manure. Sheep were kept for their meat and manure as well as their wool. Wool from the sheep would bring in extra money for the family and Mary would have gone into Barnstaple with either her mother, father or elder brothers to
sell produce from their farm on market day. Some of the wool would have kept to be spun by Mary's mother on a spinning wheel, the wool would be spun into thread and then put on a loom to be woven into cloth, a craft that all the girls would have had to learn.

By the time Mary was twenty she had met George Newcombe who had arrived in Braunton in the August of 1794, being employed on one of the farms that
adjoined the Hunts. On 2nd November 1795, Mary married George at the local parish church, George signed his name with just a capital G, so he was probably illiterate; but somehow he managed to expand his horizons and obtain the licence for an inn named Braunton Abbots on Silver Stree, Braunton a few years
following their marriage.
Mary settled into a life as an inn keepers wife and bore George five children by 1811, the eldest named George born in the year following their marriage. The other children were Elizabeth, Mary, John and Ann. The Newcombe family, it seems became respectable members of the village community. By 1829, George and Mary had moved to Tuckers House, just a few yards down from their first home on Silver Street, which was once the main road between Braunton and Ilfracombe. 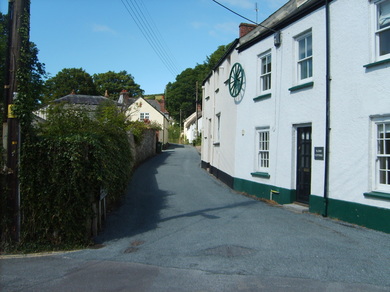 Tucker's House on Silver Street, Mary Hunts home is the cream house at the far end of the photograph
Tucker House was originally a Cob house with a thatched roof, today like so many old cottages, and as you can see the straw has been replaced with tiles.
Mary was a 70 year old widow by the time of the 1841 census, she can be found living with her youngest son John who was a confectioner on Bruport Street,
Ten years later Mary was still living with John who now had a wife and three children, but had moved to bigger premises  on Joy Street.
The date of Mary’s death is not known at present.

As we have seen the Hunt family pay a fleeting visit into the history of Braunton, appearing there at the beginning of the 18th century although we know that they
were in Barnstaple for at least two generations before that. Mary was the last in my ancestral line, however her blood and DNA  continues through her children and their story can be viewed though my Newcombe family history.
Return to Introduction