Pigott of Whaddon, Little and Great Horward and Lillingstone Dayrell Buckingham.
​​Historically, the Pigott’s Buckinghamshire holdings of Whaddon, Little and Great Horwood and Lillingstone Dayrell were held by Walter Giffard, who fought at Hasting and whose son, also Walter, was the first Earl of Buckingham. By the later half of the 15th century these manors were held by the ancestors the Pigotts.

The Pigotts of Little Horwood are said to be ‘wealthy peasants’ and were living at the manor when it was held by John Duke of Bedford. Little Horwood was one of the dukes possessions from the accession of Henry IV in 1402, until Bedford’s death in 1435 when it passed to Jacquetta, his widow on the condition that she not remarry without royal consent, but she did and by 1437 she is recorded as keeping only one third of her husband's estate. Whether that included Little Horwood is not known.
​
There is no record of the descent of this manor from that time to the 16th century. 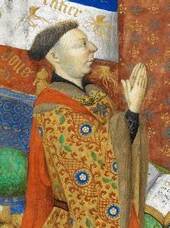 John, Duke of Bedford
It is not too difficult to believe that the Pigotts purchased the land at a time when the government of the country was in chaos and larger estates were being transferred from one family to another.  So how did the Pigotts' rise from villains to gentry? One answer could be that they were the ancestors of the aforementioned Richard Pigott, a gentleman of Yorkshire. However, the most likely answer lays in the position, held by Richard, as of Encheator of Bedford and Buckinghamshire, a job in which he was responsible for escheats, that is the reversion of lands to the lord of the fee when there are no heirs to inherit, with no lord (that we know of) the land was up for grabs! He wouldn’t be the first, or the last, to use his position to his own advantage. Richard Pigott died in 1460 at the Battle of Wakefield as part of the retinue of Richard Duke of York, and the last mention of him is in 1459 in the court rolls of Great Horwood. Richard’s son and heir Robert Pigot was Margery’s grandfather,  he had married Margaret Giffard (now misspelled as Gifford) heiress to Whaddon, a manor within the royal hunting ground of Whaddon Chase. The  keeping of which, hereditary, was the job of Giffards. The Pigott and Gifford manors were just a few miles apart and marriages of their children would have been made before 1460. Perhaps the Pigot’s climb out of the muddy fields of Buckingham was, as it has been written, ‘on the coattails of Richard, Duke of York.’

Richard’s first wife is said to have been Alice Fynelle, daughter of Richard, whose lands passed to her and then on her death to Richard Pigott. Richard's second wife was Joan Dayrell of the aforementioned Lillingstone Dayrell, but who was the mother of Robert is not specified. The next step up the social ladder for the Pigotts was taken by Thomas, Robert’s son. Thomas rose to the lofty heights of Sergeant at Law,  a small, though highly respected and powerful elite, appointed to serve as a legal adviser to the monarch and their government. 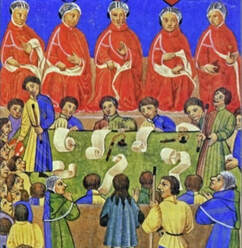 The men in the white-caps, standing at the bar are serjeants-at-law. Which one is Thomas I wonder?
Thomas Pigott was the father of Margery Pigot, the second wife of Walter Hendley, her mother was Elizabeth Inwardby of Quainton by whom he also had three sons.  Like his father, Thomas Pigot married twice, his first wife was Agnes by whom he had a son named William.

In 1495, Thomas purchased land around the Buckingham village of Doddershall and eventually he acquired the manor itself. In what has come to be known as the ‘Domesday of Enclosures’ Thomas Pigot enclosed nine hundred and sixty acres of his land at Doddershall ‘he made ruin of the said messuages and lands and willingly allowed them to be ruined and desolation.’ Sixteen ploughs were discarded and one hundred and twenty people were ‘taken from the place they had dwelt, they went tearfully away and were brought to idleness, ending their lives in extreme poverty’ This manor of Doddershall descended to Thomas his grandson.

In 1566 Elizabeth I gave him permission ‘to throw down a certain messuage and barn and convert to pasture and enclose certain lands’  Doddershall was one of hundreds of villages that  were depopulated this way and several hundred seem to have disappeared, It would seem that the Tudor  elite had learnt nothing from the peasants' response to such things. The 1381 Peasants' Revolt was partly an enclosure issue,  Jack Cade's rebellion of 1450 was in regard to land rights and by 1549 the enclosure would be the main issue to stir up what would become the Kett's rebellion. ​