A family out from under the control of the Crown and into ascendancy.

The Mohun family benefited by siding with King John, eventually the were able to back all that was theirs and their closeness to those who ran the country paved the way for an advantageous marriage.

Reynold was born around 1210 and was a minor on the death of his father, and therefore Dunster passed into the hands of the crown for the third time within thirty-eight years. In 1213 King John placed the Mohun heir under the wardship of Henry Fitz-Count, illegitimate son of the Earl of Cornwall, along with this ward-ship went Dunster Castle and various lands apart from the manor of Whichford which belonged to his widowed mother. Fitz-Count died in 1222, Reynold then became the ward of his maternal grandfather William Briwere.  Dunster Castle came under the protection of the crown who employed two crossbow men to defend it. The other estates of the Mohuns remained in the hands of Lucy, Reynolds grandmother or Alice his mother, the manor of Dunster itself still remained with the crown.
​

Trouble was brewing in the land in the shape of the barons, by 1215 they had had enough of paying for Johns campaigns with extra taxation, and John, wearied by disloyalty and his excommunication, did not take the chance to reconcile himself with these barons, and as W. L Warren in his book King John writes:

‘it was a moment for thoughtfulness, for the promotion of confidence between ruler and ruled. John did not take it. It is symptomatic of his temperament
that he chose instead to keep his barons in line by fear not affection.  He sought to fashion maximum security for the Crown out of the greatest possible
insecurity for his subjects.  He bore down even harder than his predecessors had done on the point where they were most sensitive - their family interests’

These discontented barons rebelled and captured London in May 1215.
​
A month later at Runnymede the king agreed to their demands and begrudgingly signed the Magna Carta. 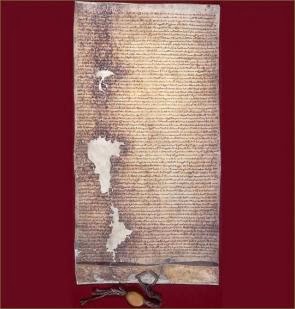 1225 version of the Magna Carta
To most in the realm, the Magna Carta protected the rights of individuals against the power of the King, but as far as the king was concerned the agreement was merely his way of obtaining peace between himself and his rebellious barons. John soon broke his word, this action was the starting point of the First Barons' War.

John traveled around the country to oppose the rebel forces, directing a two-month siege of Rochester Castle. Later retreating from the French invasion, John took a safe route around the marshy area of the Wash to avoid the rebel held area of East Anglia. His slow baggage train, including, the 'Crown Jewels', took a direct route across it and was lost to the incoming tide. His struggle with the barons, the journey and some say, the loss of all his treasure, dealt John a terrible blow, which affected his health and state of mind. He succumbed to dysentery and moving from place to place, stayed one night at Sleaford Castle before dying on 18th or 19th October 1216 at Newark Castle.  It comes as no surprise when Johns nine year old son Henry succeeded him that the barons switched their allegiance taking the side of the new king.

As a child John received no support from warring parents, no support from a self obsessed brother and as king no support from his people what chance did he have? W L Warren in his book sums up fairly accurately in my view the cause of his troubled reign.

‘talented in some respects, good at administrative detail, but suspicious, unscrupulous, and mistrusted.  His crisis-prone career was sabotaged repeatedly by the half-halfheartedness with which his vassals supported him—and the energy with which some of them opposed him.'

During these years Reynold was still under the ward-ship of his maternal grandfather who by 1226 had retired from the world to become a Cistercian monk, it was probable at this time that Reynold became of age. As a young man he was in France with King Henry III and in Wales the following year and obtained a knighthood, and it is here that we see the fortunes of the Mohuns in ascension. Living life to the full Reynold probably attended tournaments in France with the other young knights of the realm getting himself in to some financial trouble in 1234 when he was in debt to the Jewish money lenders. He was, however more remarkable in peace than in war, he was appointed as one of the Justices of the bench in the Court of Common Pleas, nine years later he was Chief Justice of the Forests in areas south of Trent.

Like his ancestors before him he was a generous benefactor to religious houses and made good the allegiances of his father, whose strong connections with the leading barons of the time, such as Henry Marshall, brother to William Marshall 1st Earl of Pembroke soldier and statesman and one of the most powerful men in Europe and Geoffrey Fitzpiers, the Chief Justiciar, were the foundation of the Mohuns rise to power.  These men were prominent member of the government of England during the reigns of Richard I and John.

​To cement these alliances Reynold married Hawise daughter of the above named Geoffrey Fitzpiers and Averline de Clare. It has been mentioned that Hawise was, in fact, the daughter of a William Fleming, a sub tenant under the Mohuns at the manor of Streatley in Berkshire. passing to the Mohuns on her marriage.  However, the manor had passed to Hawise on the death her brother William Manderville in 1227,  so we can assume, for the moment, that Fitzpiers was Alice's father.

Although his marriage was probably arranged its seems it may well have been a love match, Reynold received his Mohun inheritance by 1227 and moved his new wife into his castle at Dunster where he had a tower built and named after her.
​ 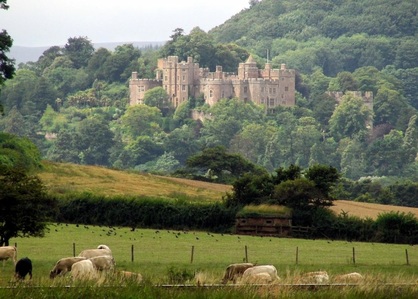 Dunster Castle today.
,﻿Hawise gave birth to their first child in 1220, after which fathered at least four children with Hawise.

The line that my family followed passed to Reynold and Hawises daughter Alice, who may have been their second child and eldest daughter, her story continues on the next page. The direct Mohun line passed through his eldest son John predeceased him, little is known of him other than he died in Gascony between 1252 and 1254.  His body was brought back to England and buried at Bruton Priory, his heart was buried at Newenham Abbey before the High Altar. John had married Joan one of the of the daughters of William de Ferrers Earl of Derby, and had two children John and Robert. John II was his grandfather’s heir, Henry III granted his ward-ship, marriage and his estates to his wife Queen Eleanor.  John had received his Mohun inheritance by1269 and had completed military service with Henry III in 1277 where he fought against Llewellyn, Prince of Wales. Fighting along side him was his brother Robert and his cousin Alice Mohuns husband Robert Beauchamp of Hatch in Somerset. John died before his reached thirty in 1277. John had married Eleanor Fitzpiers and had one son John. Reynolds other children were Juliana who married William de Lisle.  She was given by her father the manor of Walton in Northamptonshire, which was part of the Briwere inheritance and Lucy married John de Grey of Condor c1256.

On the 11th April 1242 Reynold was made Justice of Eyre. An Eyre is effectively a large area of land, and Reynold responsibility was all the lands south of the River Trent. These justices were the highest ranking magistrate within the medieval forest law system, presiding over 'the court of justice-seat' in a court that sat every three years. Reynold was able to punish offenders, control the state of the forests and its officers. In this position he was paid 100 marks.

Later in 1242 Reynold was again in Wales and took a lease out on Sauvey Castle in Leicestershire at the rent of five marks. Apart from this castle, he had many manors in addition to Dunster, he had a house in Streatly Berkshire which had come to him through his wife’s Manderville/de Saye inheritance.
Like his ancestors before, Reynold took steps to secure his place in heaven. In 1252 he entered into an agreement with the Abbot and the Convent of Torre, in the county of Devon, where he proposed to build a courthouse for the exclusive use of himself and his family, guests and domestic servants. As well has his taking care of his spiritual welfare his material wealth increased, in 1253 Reynold obtained for himself and heirs ‘free warren’ which is the privilege of killing game, at Dunster, Whichford and Ottery in Devon, with licence to hunt hare, fox, cat and badger.
​
Reynolds wife Hawise died before 1253, he married that same year Isabel, the widow of Sir Gilbert Bassett and daughter of William Ferrers Earl of Derby. On this marriage he received the lands of Mildenhall in Wiltshire and later he received part of the great lands and estates of his wife’s uncles the Marshall, Earls of Pembroke. Isabel died in 1260.

Mohun's first child with Isabel was William who was born in 1254 was six years of age when his mother died. Henry III sold his ward ship and marriage to William le Zouche for 200 marks. Through his mother he inherited manors in Wiltshire, Hampshire and Dorset, an estate in Monmouth and a large estates in two counties in Ireland. From his half nephew, John Mohun of Dunster, he inherited many of the family estates in Devon. He attended military service in Wales in 1277 and later
went on a pilgrimage to Santiago in Spain. He had married Beatrice and with her had Reynold who died in 1284, a daughter Eleanor born in 1281 who married John Carew, Margaret who died as an infant, and Mary who was born after the death of her father who married John of Meriet. Iher children by William became wards of  Eleanor of Provence, mother of King Edward I.  On the death of William, Isabel applied for a royal licence to marry her second husband.

Reynold and Isabel other children were James a clerk who studied at Oxford in 1267, he had a small estate that he was living on in 1322 and Isabel married
​Edmund Deyncourt. In Reynolds later years it is not clear what part, if any, he took in the civil unrest initiated once again by the English barons.
Reynold Mohun died on the 12th January 1257 leaving as his heir his grandson John Mohun.
​
​After his death his body was removed and taken to Newenham Abbey where it was buried near the High Altar. 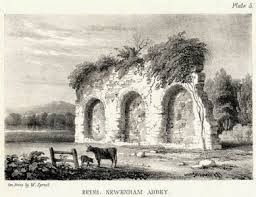 An interesting story written eighty years after Mohuns death by an a person who saw his body, claims that