By the end on the 18th century Devon farmers fell into two distinct groups; one consisting of men with small holdings who were little elevated above the condition
of labourers which was Richard Hunt, and the other, a group of men holding larger farms, running up to 300 acres. The cottages in which Richard would have lived
in his early life had not changed at all by the time he had married, it would have been constructed of red earth, mixed with straw, commonly called Cobb, and
covered with reeds or straw thatch. 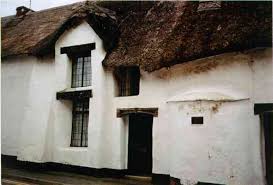 A Devon Cob House, this one dates to the mid 16th century.
As we have seen in the very first chapter, the Hunt family's baptisms and marriages in Braunton had peaked in the previous century, by the end of the 18th
century Richard was born into a family that was in decline. Richard had married Grace Bustin, on the 26th June 1763. Bustaine, to give them their correct name,
were an ancient Braunton family whose roots had held together the red Devon soil since before the Norman conquests. Richard and Grace had seven children born
at two yearly intervals starting with John in 1764, followed by Richard, James, Grace, Mary, Esther and another Richard in 1780, as we can see Richard
unknowingly played his part in keeping the numbers up.
​ 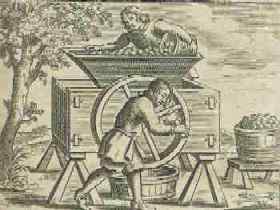 Small holders like Richard with four healthy sons would have known how to make the best use of the natural climate and the soil, apart from their animals and
crops Richard may have grown apples for cider. A jug a day of cider, along with few shillings was the daily pay for any labourer he may employ. Unlike that of his father, it seems that Richard and his family flourished.

It is likely that Richard had some knowledge of what was going on in the country for Great Britain had become a major power worldwide with the defeat of
France in the Americas, and in the 1760's Britain had conquered large parts of India. He may have known of the patenting
of the steam engine which would later modernise farms such as his, but it would have come to late for Richard who probably was one of the last  to use a plough drawn by a horse or ox. Richard and Grace had done well to bring up their children, all but one child lived into adulthood, a son named after his father was born and died in 1766.

The death of Richard himself is not known.

Richard's second eldest child was John, he may have left the community for there are no other references to him. James, their third child went on to have three
children, his son John had four children, one of which was a farmer of 90 acres of land by 1851. Of Richard's daughters three daughter'ss the  eldest Grace married into the Boyle family of Braunton and had three children two of which died with in their first year, Esther married  Richard Mock and had
three daughters, of which Mary is the only one to be found on any of the censuses. The life of Esther and her daughter Mary can
be viewed on the 1841 and 1851 census but it is sad reading, Esther lived  as a pauper on Mill Stile, pictured below, for twenty years and Mary can be found
in the last census living with her mother. 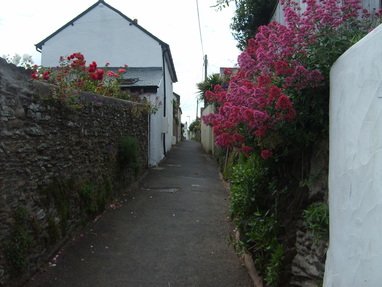