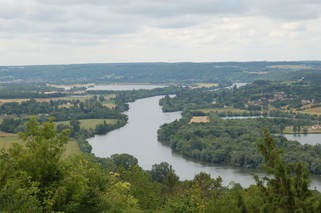 ​The roots of the Tosny family are embedded in the formation of Normandy when the Vikings arrived at the mouth of the River Seine in the 9th century. What would become the Duchy of Normandy was created by treaty, following the fall of Charlemagne’s empire, between Viking leader Rollo and the Frankish Charles the Simple. The Treaty of Saint Clair Sur Epte gave what is present day Upper Normandy to Rollo and the City of Rouen to Charles. By 911 Rollo was going by the title of Duke of Normandy and by 1020 his descendants, the ‘Normans’ continued to conqueror lands west of the duchy that included the island of Mont Saint Michel.

​This new Dukedom levied taxes, struck their own coins, made and dispensed their own laws and appointed many of their own families to important roles in government. Normandy was an independent region and was not under the jurisdiction of the French king. The Norman hierarchy became wealthy and powerful, giving land to Normandy’s religious communities and the newly created Norman elite, naturally they expected loyalty in return - thus the infamous feudal system was born. By 1002 the Norman nobility had established ties with the English monarchy when Emma, the sister of Richard (the grandson of Rollo) married King Aethelred, this advantageous marriage would prove useful in 1066 when the Normans conquered England and set in motion the greatest political change the country had ever seen. This conquest was also brutal, these Normans stripped the English aristocracy of the lands they had held for generations and gave it to those who battled at Hastings and those who came after.

One of those men was Roger de Tosny (pronounced Tony) who was of Norman stock however there is evidence that he may have Viking blood in his veins, it has been suggested that he may have been descended from the uncle of Rollo the aforementioned Viking who conquered Normandy. 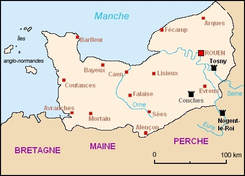 ​This family take their surname from the lands around the French town of Tosny, they established themselves at Conches. As a family you could say that they were the French equivalent of the Bigod’s, the Earls of Norfolk, they were troublemakers to be precise!

The de Tosny progenitor of the ancient family is thought to have been Roger whose wife was Godehold. However, the descent of this family is confusing to say the least and the naming pattern of sons only hinders research. The main train of thought is that there were two, maybe three individuals all with the same name who were active during the first half of the 11th century.

From this newly formed Duchy the family of Tosny emerged. Ten years into the new century as mentioned, they had taken their name from their hereditary lands (one of the first families to do so) at Tosny, a town just ten miles from Rouen, that lies in the Seine Valley. Despite being linked to the great great grandfather of William the Conqueror the Tosny’s were not part of the Duke of Normandy's court. 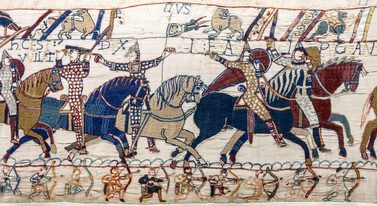 Roger de Tosny is quoted a being the first of the Tosny’s of note, he was a warmonger known for his military prowess and his squabble with the Beaumont family of Beaumont de Roger in the east of Normandy. It was in battle with the Beaumonts that both he and his two older sons lost their lives. Roger de Tosny’s younger son Ralph (the conqueror's standard bearer) succeeded him and it was he who founded the branch of the de Tosny’s in England that we are concerned with here.

My direct ancestry from the English branch of the Tosny family lasted just four generations through the main male line from 1040 to 1126. It ended at the turn of the 12th century with the birth of a daughter - Godehold de Tosny.