Ellen Hendley was the second daughter of Walter Hendley. She was born in 1521 at Guestling in Sussex, the ancestral home of her mother Ellen Ashburnham, whose father, Thomas Ashburnham had been a local government official in the ports of Winchelsea and Rye. It was under Thomas's guidance that Ellen's father pursued a career in law.
In 1523, Ellen's grandfather had arrived back in Guestling infected with the plague from which he soon died. Ellen's mother also died that year, although she may well have died from complications in childbirth after giving birth to Ellen's sister Anne, but her dying from the plague cannot be ruled out. Ellen was just two or three when her mother died and her father was left a widower with three young daughters. However, within four years he had married Margery Pigott, the nineteen year old widow of Thomas Cotton. With both her grandfather and grandmother now dead, the family estate passed to John Ashburnham and sadly history doesn't tell us what exactly happened to the house at that time. However, it would seem that at some point Walter had made a decision to move his family back to his home of Coursehorn in Kent. Walter was the eldest son of Gervais Hendley and Elizabeth Roberts, and he may have known that he would one day receive Coursehorn as his inheritance, and with this in mind the family moved into their own house on the manor where Margery could raise the children while Walter began his new career in London. It was during the following few years that Walter made plans for the marriages of his three daughters, and Ellen's future husband was Thomas Culpeper of Bedgebury. 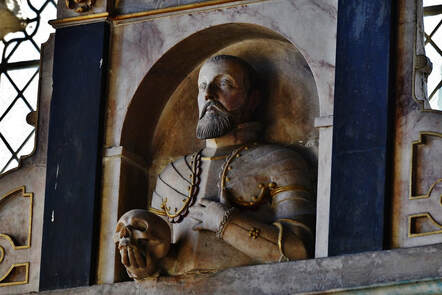 Thomas Culpeper 1502 - 1558 First husband of Ellen Hendley
The Hendley’s and the Culpeper's were neighbours, Walter however would have also known Thomas Culpeper from the time he worked in Augmentations, when Culpeper was a servant of Thomas Cromwell. Culpepers first wife Elizabeth Haute had recently died, maybe he heard her death from Thomas himself or perhaps it was Margery who told him. Either way Walter recognised an opportunity when he saw one, after all who better to show sympathy and give advice than a man who had been in the same position himself. Within less than a year of Elizabeth Hautes death, Ellen and Thomas were married. Ellen was a young girl of not more that fifteen or sixteen, and only just a few years older than her eldest step child. By 1541 Ellen had given birth to three sons, George, Walter and Ponyng, and that year with a swaddled baby and infants in tow, Ellen swapped one Tudor manor house for another when her father in law, Alexander Culpeper died an old man in his eighties. Ellen would live the life of a Tudor wife with the advantages and disadvantages that came along with it.

Thomas held land in Kent, Sussex and Essex, numerous properties, an iron foundry in Goudhurst and held the position of Sheriff of Kent.  On the 6th August 1557 Thomas Culpeper wrote his Will, to ‘Ellen my welbeloved wiffe all her apparell, jewelles  which she hath heretofore at any tyme vsed to ware. Also all my corne and grayne and thone half of all the beofes and muttons and all my beere, wynes, all other kynde of provision at Begebery and Maytam’  Culpeper had already made provision of lands and property for George, Walter and Ponyng and as they were all under the age of twenty-one, their care was entrusted to their mother Ellen. The remainder of his estate, including Bedgebury, was granted to Alexander, his eldest son by his first wife. By the spring of the following year Thomas Culpeper was dead, Ellen had been married for just over ten years.

Tudor widows like Ellen were free to manage their own affairs, and any subsequent marriages were often to men of their own choosing. How Ellen's marriage to George Somerset came about is lost to history; it is interesting to note though that three of George’s immediate relatives had married into the Guildford family, who were the Hendley's neighbours at Coursehorne. George Somerset's aunt was married to Edward Guildford, whose sister Mary had been the mother of Thomas Culpeper's first wife. It was not long after Culpeper’s death that Ellen married the widowed George Somerset, the son of Charles Somerset, 1st Earl of Worcester who was, in turn, the illegitimate son of Henry Beaufort, 3rd Duke of Somerset. George’s father had been knighted by Henry Tudor when he landed in Wales in the August of 1483. It was at this time that he changed  his name from Beaufort to Somerset, a nod towards his more illustrious ancestors. By doing this Beaufort avoided trouble that might come from the suggestion that he had a better claim to the throne than that of Henry Tudor. 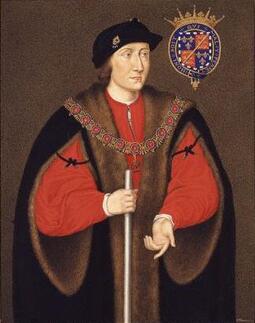 Charles Somerset 1st Earl of Worchester (1460 - 1526) was Ellen's father in law.
​​George was first married to Mary Bowles, heiress to Thomas Bowles of Penhow in Wales. On the death of Mary's father, George received Penhow Castle, the ancestral home of the Bowles, but this estate was sold after Mary's death. From his father, Somerset had received the Suffolk manors of Reydon and Wickhambrook, the latter had passed to Somerset on the death of his step-mother Elizabeth Herbert, the heiress of William Herbert, 2nd Earl of Pembroke in 1526, and it was here in 1541 that he built Badmondisfield Hall which, it seems, was his main residence. 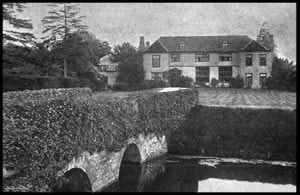 Badmondisfield Hall (featuring its moat) was Ellen's home.
​By 1558, at the age of thirty four, Ellen had begun her new life as Lady Ellen Somerset in the East Anglian county of Suffolk.
However, fate soon intervened and Somerset was dead by the end of the following year and Ellen, after only a very short time, was a widow once more. There is no record of a child from Ellen's marriage to George Somerset, and on his death his estates passed to his children from his first marriage to Mary Bowles. Somerset wrote his Will on the 9th March 1559, and to Ellen he bequeathed all the possessions she brought to the marriage and all  jewellery that she had been given. It is not known how long Ellen remained in Suffolk following Somerset's death but my guess is that it was not long, for the fenlands were flat, cold and wet and not a place for a widow without family. It comes as no surprise that eventually Ellen was back in Kent with her sons.

Ellen was a widow twice over, and being a widow was a period in a woman’s life when she was the most independent, unlike an unmarried woman, who often remained financially dependent on the family, the widow had access to money and property that ensured a measure of financial independence, she also had the choice of who to take as a new husband, and Ellen soon made her choice in Thomas Fane the Younger, who like George Somerset had family connections to the Hendley's.

The Fanes, who by the mid 16th century had established themselves in Tonbridge in Kent, claimed that their ancestor fought at Poitiers in 1356, and for capturing the French king was rewarded with a golden gauntlet. True or not, this deed added a bit of prestige to their family history and they incorporated it into their heraldic device - three golden gauntlets on a blue background. Their connection with the Hendley's came in 1545 when George Fane’s first wife died and he married Ellen’s older sister Elizabeth who became the step mother of the aforementioned Thomas Fane and his older brother, also Thomas and their three sisters. It is not known if Elizabeth had any influence in the choice of brides for these two boys, but I suspect she did because the elder Thomas married her niece Elizabeth Culpepper, Ellen's stepdaughter, and Thomas the younger as we have seen married Ellen herself.
​
Thomas Fane, unlike his older brother and their cousin Henry Fane, doesn't seem to have taken part in what history calls the Wyatt Rebellion of 1541. Thomas Wyatt was executed and his lands confiscated, Thomas and Henry however were sent to the Tower of London but soon released

The Wyatt Rebellion of 1554.
​One of their manors confiscated was Buston, and in 1558 is listed as being the property of Thomas Fane the younger, and living in the manor house that year where George and Walter Culpeper, Ellen's sons from her marriage to Thomas Culpeper. It is likely that Ellen was already acquainted with Fane when she was married to her first husband, and on her marriage to Somerset arranged for them to live in his house in Buston, and perhaps it was here that she returned as a thirty-six year old widow.

Her marriage to Fane didn’t happen straight away, they were married some six years later in 1566. Ellen Hendley was eighteen years Thomas’s senior and was forty-four on the day of her marriage. Despite this age gap they had a long marriage, during which their daughter Mary was born. Mary would be their only child, and she would go on to marry the son of the aforementioned Henry Fane. From 1566 onwards Ellen’s life was settled, she spent her time at their manor of Buston while Fane pursued a career in local government that seems to have begun in 1579 when he became a Justice of the Peace and lieutenant of Dover Castle. Towards the end of his life he served as deputy warden of the Cinque Ports under William and Henry Brooke, 10th and 11th Lord Cobham respectively. In many ways, Ellen and Thomas' marriage was a usual one but in its length it was certainly not, according to the Fane Monument in Hunton Church they were married for forty years, this was quite a feat in an age where marriages were often short. 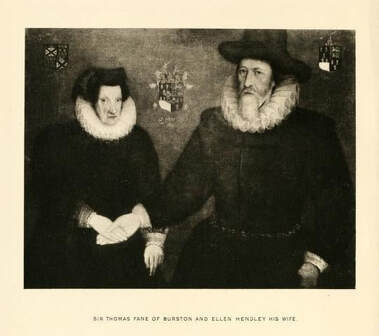 ​Both Ellen and Thomas Fane died in October 1606 and written in the parish register of St Mary’s Hunton is the following -
1606  Sir Thomas Fane Knight was buried ye 23rd of October. And his Ladye Elenor Somersett, also Lady Fane was layed beside him the 23rd of October.
​
Anne Hendley