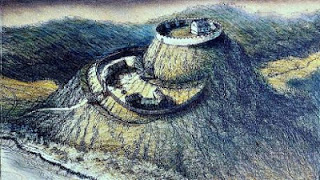 Dunster Castle by Stephen Biesty
Mohuns, Norman Lords of Dunster in the County of Somerset.

This family were 11th to 13th century feudal barons and my 22nd to 28th great grandparents.

My direct ancestry within this family lasted six generations through the main male line from 1050 to 1257, the direct line ending about 1212 with the birth of a daughter.

The Mohuns, pronounced Moon, owned Dunster Castle which proudly stands on what is known locally as The Tor, which is in fact a very steep hill.
​The arrival of the Normans saw these lands given to William de Mohun who built a timber castle here to keep an eye on the rebellious English in the West Country. It was a motte and bailey castle, the motte being built at the beginning of the twelfth century. The Mohuns lived in and owned the castle until it passed from them to the family of Luttrell.

The progenitor of this ancient family was one William de Moion whose name probably derives from the French village of Moyon which lies just south of St Lo in Normandy, and it seems that this family had considerable land and possessions there. In 1027 these lands formed part of the dowry of Adela, Duchess of Normandy. Mohun descendant's flourished in the west country and their names can be seen in such villages as Ottery Mohun, Tormorham and Grange Mohun in Ireland.

It is more than likely that the first mention of a Mohun is a William whose name is found in “Le Roman de Rou” a work by Wace, a Norman poet. This work covered the history of the Duchy of Normandy at the time of Rollo until the Battle of Tinchebray in 1106, it was written two centuries after the event and therefore must be treated with skepticism. 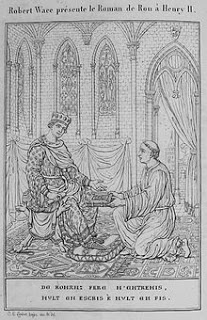 Robert Wace presents Le Roman de Rou to Henry II
Nevertheless, William was named in this work as “Le Viel Willame de Moion” where it is stated “Ont avec li maint compagnon," which roughly translated means “to have many comrades.” There is little mention of William in books I have read but the main concentration of interest in William via the internet is the meaning of the above quote.
“Ont avec li maint compagnon."

The term Viel in our own language means old and therefore implies that he is the elder of two William Mohuns.

The early Mohuns were landlords under Robert Count of Mortain, half brother to the conqueror and the biggest land owner in the south-west. The Mohuns prospered under the reigns of the first Norman kings and with the county of Somerset ‘settled’ they were able to fund the building of religious houses. William's son, also William was the most prominent of the Mohuns becoming infamous in the west country during the power struggle between Matilda and Stephen. Mohun sons and grandsons found themselves caught up in the troubles that Richard I, King John and the Barons Wars brought to the country. Dynastic marriages into the FitzPiers/deClare family and later the de Ferrers see the family hovering on the fringe of England’s power base with a connection to the family of William Marshall, Earl of Pembroke, regent of England.

The Mohun line continues past my direct ancestor Alice Mohun, who married into the Beauchamp family, to her nephew John Mohun.

By the middle of the fourteenth century the last male Mohun had died childless and his wife left in control of the estate, eventually Joan Mohun passed Dunster into the hands of Elizabeth Luttrell whose descendants held the castle and manor for the next 600 years.

Today the castle is run by the National Trust, it was bequeathed to them in 1976 by the last Luttrell one Geoffrey Walter Fownes Luttrell. 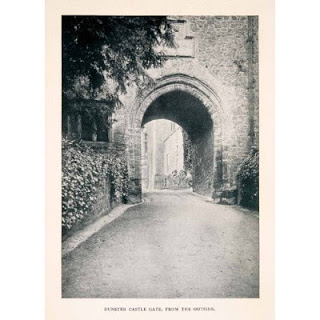 Medieval Gatehouse of Dunster Castle
The castle seen today by visitors is the house as it would have been seen in the seventeenth century, all remains of the medieval castle is the gatehouse and towers in the lower part of the house. 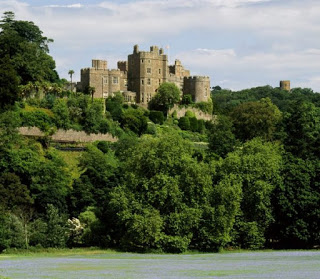 Dunster Castle as it is today