It is in the small village of Barkby, that lies just south of Syston and four miles south-east of Leicester, that we first meet Susanna Smith. Susanna is the last of my Smith ancestors, where she came from, who her parents were and where they lived, is at present, a mystery.
If you take a stroll through Barkby today and take away the cars, the telegraph poles and satellite dishes you will find it much as it was centuries ago, you will still see the village's babbling brook, brick footbridge, framework knitters cottages that overlook Barkby Brook and it local public house (parts of which date back to 1245.) 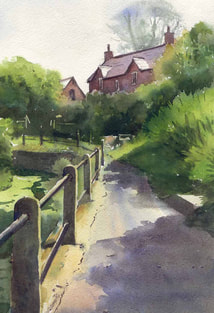 Barkby's framework knitters cottages overlooking Barkby Brook. Image reproduced with the kind permission of Andy Shore
Susanna first appears here (in records at least) in the early part of the 18th century, as a single woman alone in the village with no family. Barkby parish records show evidence of persons living in the village by the surname of Smith from 1588 until 1771 and they number less than fifteen. Five of those can be found in the late 16th to early 17th centuries and are listed under the spelling of Smyth, the rest are listed under the modern spelling of Smith and they can be found living in Barkby between 1710 to 1771. There are two families - one headed by John Smith with his wife Elizabeth Plant and John Smith to Mary, sadly Susanna fits with neither of them.

Smith, being England’s most commonest surname makes it quite difficult to trace a family line. The origins of this surname falls into the category of occupational names, so will not surprise to you when I write that the surname of Smith has its roots in metalwork and interestingly in the gypsy community where this surname was often used to hide an identity. Today, the name John is the fourth commonest christian name that Smith parents name their newly born sons -  as just mentioned, both marriages in Barkby were John Smiths.
So who was Susanna, and why was she alone in the village and why was she there?

I think that the answer to these questions lie in domestic service.

A 17th/18th century servant girl was usually young and unmarried and would work in this environment until she finally married and started a family of her own. Girls born and bred in the country could be found working in the homes of the aristocracy and in the houses of local gentry, like the Pochin family of Barkby Hall, a large estate that cuts the village in half.

Barkby Hall is a Georgian house built in 1807 that stands on the site of an older house. In 1790 the Pochin’s lived in a Jacobean house that was described as a

“plain dwelling environed by high walls and shaded by some lofty elms.”

even today the ‘new’ house is totally hidden from view. At the time Susanna lived in this village William Pochin was head of the house, his family had been resident at this estate  since 1442, a series of marriages with wealthy heiress of other local landowning families - the Willoughbys and the Trollopes, resulted in the large estate that can be seen in Barkby today. Large houses such as the one at Barkby needed servants to run them, up to the middle of the 18th century many of those servants lived in local villages and there were as many men employed in this way as women, a hundred years later there had been a big change - women would outnumber men.
​
In Barkby however the main employment for the male was agriculture and the biggest employer of women was domestic service. 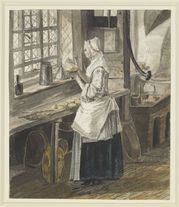 Susanna Smith is typical of the 18th century female domestic servant, a class of servant the gentry preferred. She was single and from a rural community despite having no obvious family connections in the village, and this suggests that maybe she was not a hired stranger, but was distantly related to someone who already worked at the house or new of a position there - through kinship with the Smiths in the village she was able to gain employment away from her home. 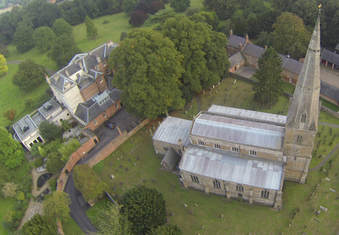 As you can see in the image above, the village church of St Mary’s stands with its back to Barkby Hall, and is surrounded by a large grave yard. It was down the church path that Susanna Smith walked on her wedding day. The church’s register reads - Thomas Needham of Syston and Susanna Smith of Barkby were married on the 30th May 1739, this is the first and only time she appears in records in Barkby.

Three years following their marriage Susanna and Thomas had moved to Syston, the village of Thomas’s birth, another small village whose main employment was agricultural based, but unlike Barkby, Syston would grow at a faster rate due to its connections with the stocking frame.  There were just two houses in Barkby that were thought  to contain stocking frames, there were far more in Syston. In Barkby the manufacturing of textiles came and went pretty quick, it survived far longer in Syston.  However, when the great textile mills took over, Syston’s stocking frames were soon abandoned and the workforce would go on to find employment in the foundries and in the boot and shoe industry that had established themselves in the town. The building of Syston’s station, a branch line to Melton Mowbray, also lead to an increase in the population, by 1801 the inhabitants were counted as 1,124 as opposed to Barkby having just 389. With all this in mind, it is easy to see that the thought of a better life was the reason Susanna and Thomas moved to a bigger village, after all Susanna had nothing to keep her in Barkby.  Records show that there were only five people in her village going by the name of Smith - and they may or may not be related to her at all.

It is not known exactly why the Needham's choose not to leave Barkby, but they can be found in Syston in 1742. In the October of that year Susanna had given birth to her first child who they named John, and exactly two years later to another boy, who they named William. It is interesting that Susanna only gave birth to two children in an age when families had up to five, six and seven children.

One reason for this could be Susanna’s age, she was in her early thirties when she married and with age comes the difficulty in conceiving, two years of marriage had passed before she finally became pregnant (there are no references to a Needham infant death in Barkby’s burial register from 1739 to 1741) and by the time of her last pregnancy she would be in her late thirties, there could be any number of reasons why Susanna did not fall pregnant again. 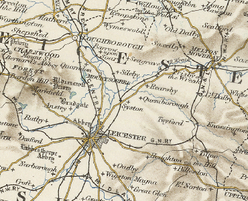 The years of Susanna’s life that followed the birth of her sons can really only be viewed through the progress made in engineering and textiles and the benefits the Industrial Revolution brought to their village, and also through the events of that affected the country - the death of George II and the accession of George III, the war with Spain following the oddly named alteration - the War of Jenkin’s Ear, the arrival on the Scottish shores of Bonnie Prince Charlie and his defeat at Culloden, the strained relationship between Britain and America that would lead, after Susanna’s death in 1775, to the American War of Independence.

Susanna Smith died in the the last few days of May 1774, a relatively young woman but not alone as we found her, but with her husband Thomas and her son William. She was buried on the 31st May in the churchyard of the rather impressive church of St Peter's and St Paul at Syston.

Susanna’s bloodline runs though her son William Needham, and it is through their lives that my family story continues.